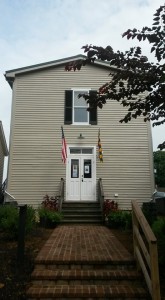 Nearly a decade ago a coalition of preservationists, foundations and philanthropic citizens joined together to save Chestertown’s historic Grand Army of the Republic building from demolition.  They also raised sufficient resources to renovate and re-open it in June 2014 as a small museum, performance hall and educational space.

During its initial year of operation, the Kent County Arts Council, under the leadership of Executive Director, Leslie Prince Raimond, took responsibility for offering a series of performances, films, art exhibits and receptions that re-introduced the community to this newly restored historic space.

On July 1, 2015, a newly elected Board of Directors took the helm of G.A.R. Post 25, Inc. – the nonprofit tax-exempt organization established to manage the restoration of the building and program offerings. Since then, the Board has:  (1) created a membership association to help fund operating costs; (2) developed a set of programs that will be offered in the next several months; (3) outlined a proposed set of projects to expand the museum’s historical collection; and (4) enhanced our social media presence with a Facebook Page, Twitter Account and a new website:  www.sumnerhall.org.

Since its founding, the building has been known by several names, as recalled by local residents and recorded in newspapers: Charles Sumner Post #25, Grand Army Hall, Sumner Post, Centennial Hall, The G.A.R and G.A.R. Post 25, Inc.  Looking to the future, the Board has just completed an informal survey of a sample of our stakeholders and has decided to call the building Sumner Hall – a name that both keeps alive the name of the historical figure that the post members chose for their organization and also describes its current use.

We hope to see you at Sumner Hall soon. Please visit our website to learn more about our programs, performances and new initiatives. Consider renting our space for your next party or meeting. And, if you have not already joined, we look forward to welcoming you or your organization as a Charter Member of Sumner Hall in the very near future.